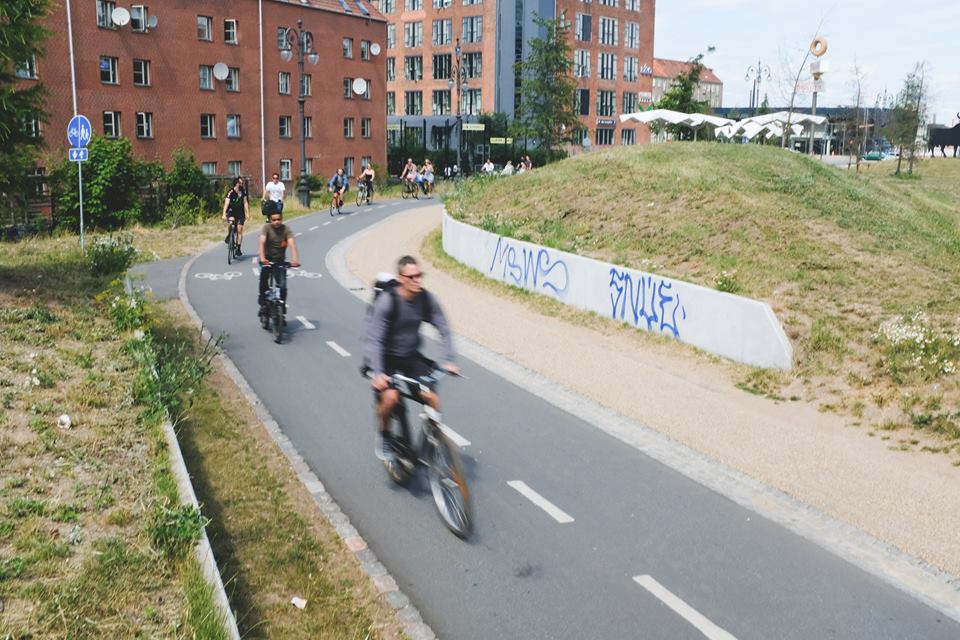 This is the third part of our series from 2017 Walter Dickie Leadership Bursary winner Steve Brooks, National Director of Sustrans Cymru. In this blog he talks about what he learnt on the Copenhagenize course in Denmark, and how city leaders can promote sustainable transport in their cities.

I came out in Copenhagen and it was liberating.

I’m not a cyclist. There, I said it.  Mikael Colville-Andersen said it to me, and I said it back to him.  Mikael is an urban designer and mobility expert and the founder CEO of the Copenhagenize Design Company.  Mikael is an example of a social-entrepreneur who’s identified a social problem and is working to fix it, albeit in the private sector.

Clearly, in one sense I am a cyclist.  I work for Sustrans, I have a shed full of bikes and virtually every pair of trousers I own has stubborn oil and dirt marks around the ankles.  But in another sense, I am not a cyclist. Cycling is something I do, rather than something I am.  Lots of people cycle for sport or leisure, and sometimes I do; but most of my trips on a bike are for practical purposes like commuting to work or traveling to meetings.

Mikael drew a parallel with the vacuum cleaner.  Most of us own one and use one regularly, yet we wouldn’t describe ourselves as a ‘vacuumists’.  It’s just one of several machines we use to make our lives easier.

Copenhagenize is an inspirational opportunity to spend time in the Danish capital with two dozen architects, urban designers, transport planners and cycling advocates to look at how the Danes did it.  And by did it, I mean ditch their addiction to the car and travel more sustainably. 41% of all journeys in Copenhagen are done on foot or by bike. Factor in bus, train and metro, and the proportion of people traveling by car are a minority. The public policy consensus in the city is that municipal leaders will aim for a modal split of ‘thirds’: no less than a third of all journeys on foot or by bike and no more than a third in a car, with public transport making up the difference.

‘One big lesson for me from Copenhagen is on the role of innovation. In one sense what Copenhagen did was innovative. In another sense, it wasn’t…’

Like most European cities recovering from World War II, the economic boom of the 1950s and early 1960s led to an explosion in the number of cars on Danish roads.  The city was becoming car clogged.  One answer was to build a motorway over The Lakes, a series of three lakes arcing around the edge of the city centre.  A blue equivalent of Cardiff’s green Bute Park. From a traditional transport perspective, this looked like a good idea. The motorway would create an atrial route through the city and connect the travel corridor to Sweden in the north with an onward route to continental Europe to the South. But as well as devastating the city’s natural environment, twelve lanes of motorway would rip through one of the city’s most important working-class districts.

A similar idea was planned for Cardiff (CentrePlan 70), but thankfully both schemes were shelved before serious construction was started. Whilst Cardiff decided to grin and bear its traffic woes, Copenhagen took a different approach and began to take space away from cars, and prioritised people. External circumstances, like the oil crisis helped, but basic political leadership and common sense urban design created a revolution. Over the next few decades, the city systematically redesigned its streets providing protected cycle lanes.

One big lesson for me from Copenhagen is on the role of innovation. In one sense what Copenhagen did was innovative. In another sense, it wasn’t. They used approaches tried and tested for over a hundred years. The basic design principle is unchanged: provide protected space for bikes that’s safe and efficient, and away from motorised vehicles (or horse and carts) and gets people from where they are to where they want to go. Obviously important developments have come along: bike hire schemes, electric bikes, and safer, better surface materials; but fundamentally what needs to happen in 2018 is the same as 1918. There are few, if any, design and engineering problems the transport industry will encounter in Wales that haven’t been dealt with somewhere else, at some other time. Innovation isn’t always about re-inventing the wheel. Sometimes it’s looking for the solution elsewhere, copying a basic idea, tweaking it a bit, and rolling it out at scale.

The overwhelming reason why Copenhageners cycle is because it’s faster and easier than other modes. People know they gain health benefits and limit their environmental impact, but this for most of the city’s residents are second-order issues. Go to Copenhagen and you won’t see too many cyclists – people wearing lycra, riding expensive road bikes. You will see plenty of people using bikes, going to work, taking the children to school, and dressed for their destination not their journey.

The lesson for city leaders is this. Getting more people walking and cycling provides the state with numerous benefits. It lessens demands on health spending, improves the quality of the local environment, and provides economic benefits. And whilst most of the population will care to some degree about these wider benefits, the vast majority of people want to drop their children off at school and get to work quickly and safely. So expensive public campaigns promoting the health benefits of cycling will only reach a certain part of the population. If you really want to deliver a health impact, enable people to travel actively by building more bike lanes. Start with the user in mind – people who happen to cycle.