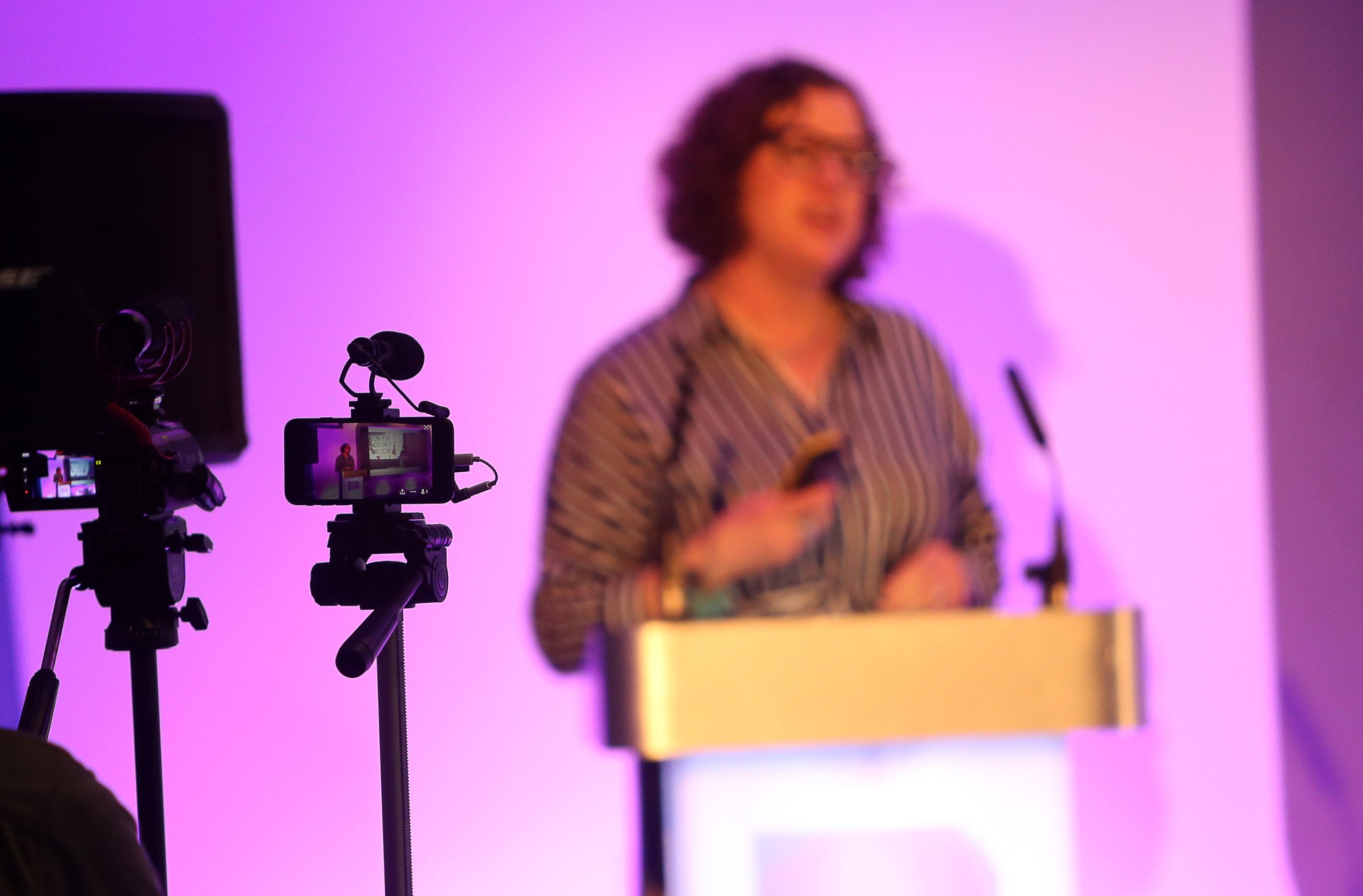 The Safbwynt sessions are returning to the gofod3 theatre in 2020 – short talks that give different perspectives on the topics that matter to Wales’ voluntary sector. Here’s a guide on what to expect.

As I’m sure many of you are aware, gofod3 is back at the Cardiff City Stadium on 19 March 2020. The biggest event for Wales’ voluntary sector is even bigger this year, with more opportunities to connect and make a bigger difference together than ever before. Don’t miss out on your free ticket to the Welsh voluntary sector’s most hyped event of 2020.

Those of you who attended last year will be familiar with the Safbwynt sessions, a voluntary sector spin on the TEDx talk format, where speakers deliver soapbox lectures on the topics that matter to Wales’ voluntary sector.

We’ve enlisted a series of well-respected speakers from across the sector (and further afield) to appear on the gofod3 stage.

Covering themes ranging from crowdfunding to poverty to national emergencies, the gofod3 theatre promises to be buzzing with stimulating discussion throughout 19 March.

Here’s a short introduction to each speaker – spaces are limited so book your ticket to gofod3 before it’s too late!

‘Young Trustees: the what, how and why’

Leon is Deputy Chair of Brook Young People; the UK’s largest sexual health charity for young people. He has been a trustee for 10 years since first being appointed at 18 to the board of Plan UK, later publishing the Young Trustee Guide in partnership with the Charities Aid Foundation. Leon also runs the Welsh operations for the youth social action charity First Give which works in partnership with over 35 schools in South Wales.

Leon thinks that charity boards have a diversity problem. In his session, he’ll argue that this is not only poor board recruitment but because our entire perception of boards is wrong.

This session will help turn our current thinking of boards on its head and challenge you to think differently about who you need around your board, why you need them and how to go about changing your practices to open up your board room.

‘Trust, Transparency and Technology – the tool-kit for a modern day third sector leader’

After a cross-sector career, Karen Cherrett is back in Wales having established her own business and becoming co-founder of the Cadenza Partnership. Karen is passionate about delivering user-centric change, improving public service outcomes and experienced in helping organisations deliver more through the people they work with. She is a Trustee at Drive and Care and Repair, both of which enable independence.

In her Safbwynt session, Karen will talk about how charities can often become blinded by their cause at the expense of seeing the need to effectively manage relationships, resources and returns on donor investment to properly serve their cause.

‘Forensics to Fundraising: A journey of a quirky career and pitfalls that led to successful voluntary action’

Next on the bill is Abi Carter, co-chair of Remembering Srebrenica. As a Forensic Archaeologist, Abi worked on evidence from the primary and secondary mass graves associated with the genocide in Srebrenica, Bosnia-Herzegovina, and since then has raised more than £10,000 for the charity and won the ‘Board member’ category at the Womenspire awards 2019.

Abi’s story is one of hard work and determination which saw her nearly walk away from the voluntary sector on several occasions. Come to hear her speak about her journey which has led to her receiving awards for her voluntary work – in a very unusual charity.

John Herriman is the CEO of the National Emergencies Trust, who collaborate with charities and other bodies to raise and distribute money and support victims at the time of a domestic disaster. He has a career that spans military, public and private sector and more than 30 years’ experience of developing strategy and delivering operations in both the UK and overseas.

John is a long-standing supporter of the voluntary sector, passionately believing in its ability to harness the goodwill, enthusiasm and compassion that can enable purpose driven collaborative working in times of need.

Kellie will use her Safbwynt session to speak about building resilience in regional economic development, and what we mean by inclusive economies and the opportunities to do things a bit differently in the Cardiff Capital Region.

Mandy Johnson is the Founder of GreatCharitySpeakers.com and Sketchnotes UK. She was recently in the top 20 of Onalytica’s top 100 charity influencers. She has worked for a wide variety of organisations, including the Small Charities Coalition, Cancer Research UK, Marie Curie, Change.org, NCT and Deloitte. Mandy sits on the Herts Funding Network Committee and is a Trustee for Bedfordshire and Luton Community Foundation.

In this session, Mandy will cover the steps that anyone can follow in order to run a successful crowdfunding campaign. She will go through examples from organisations who have used this fundraising method successfully and breakdown the process into simple steps so that anyone can give it a go.

Next up is entrepreneur Ranjit Ghoshal. After leaving a career in the housing/voluntary sector, Ranjit injured his knee training for a charity challenge and founded One Million Steps, a Cardiff based Social Good tech startup providing a full package fitness challenge and fundraising platform.

Ranjit is a Fellow of the School of Social Entrepreneurs, a UnLtd Award Winner and was recently shortlisted finalist for Entrepreneur for Good Wales Great British Entrepreneur Awards 2019.

One Million Steps is the only Welsh start-up to win a place at Google Launchpad London.

Ranjit has been a Board Member/Trustee on three charities; Chartered Institute of Housing Cymru, Shelter Cymru, and Tenant Participation Advisory Service Cymru.

Ranjit will look at the important business concepts that helped One Million Steps dig deep into the very different needs of three distinct stakeholder groups: businesses, non-profits and individuals – connecting them and creating value for each one.

Sophie Howe, the Future Generations Commissioner for Wales, provides advice to the Government and other public bodies in Wales on delivering social, economic, environmental and cultural well-being for current and future generations and assessing and reporting on how they are delivering.

Sophie took up post in 2016 and has led high profile interventions around transport planning, education reform and climate change challenging the Government and others to demonstrate how they are taking account of future generations.

Sophie will speak about the interests of future generations in Wales.

The Deputy Minister and Chief Whip Jane Hutt will be joined by a panel of community groups to speak about the Wellbeing of Future Generations Act five years on. The panel will be followed by a Q&A open to delegates on the floor.

The session will explore how voluntary organisations are making a difference and what we can do to make a bigger impact together for the future.

‘Tackling poverty, unemployment and under-representation in the workforce’

Our final speaker is Ali Abdi of Cardiff University.

Ali leads on the partnership development between Cardiff University’s flagship civic mission programme Community Gateway, individuals, and organisations within Grangetown with a focus on breaking down barriers between the University and the local community.

With Citizens Cymru Wales, Ali has spearheaded and co-developed a Community Jobs Compact with residents, which builds relationships between local employers and local businesses.

The Community Jobs Compact aims to bring local people and employers together to tackle poverty, unemployment and under-representation in the workforce.

The Compact will encourage employers in the area to commit to best practice in relation to pay, equal opportunities.

Ali was recognised for his work with BAME communities in Wales and nominated to receive a British Empire Medal in the New Years Honours List for 2020.

Ali will talk about the practical steps you can take for your organisation to tackle poverty, unemployment and under-representation in the workforce.