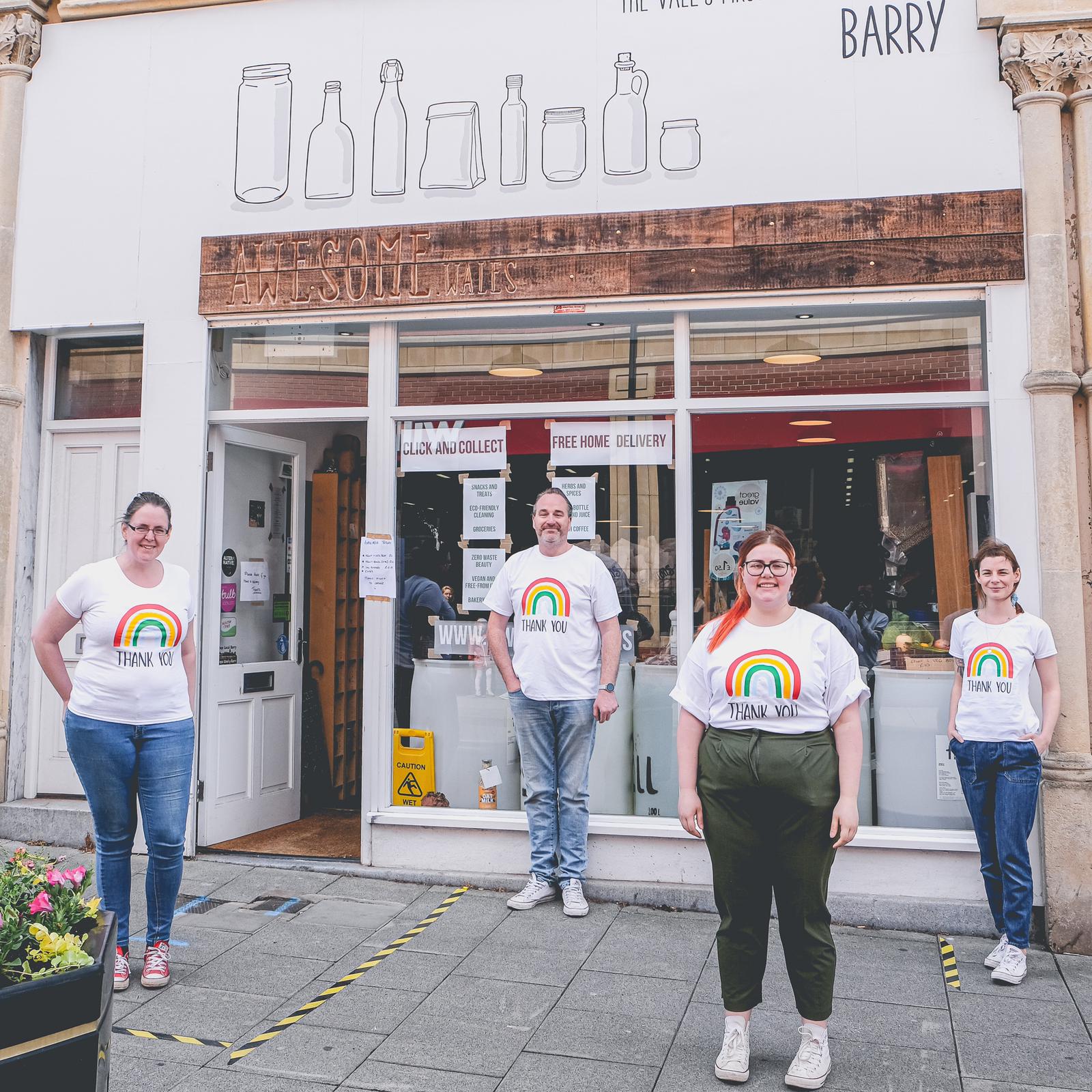 Awesome Wales quickly found a place for themselves on Barry’s high-street – we look at how running as a social enterprise with good community values helped underpin their business success, with some help from the Social Business Growth Fund.

When people think of good business plans, you could forgive them for thinking of Dragon’s Den or The Apprentice before their minds turn to the voluntary sector, but Awesome Wales show that a good business plan and good values aren’t mutually exclusive.

Awesome Wales is a zero-waste store and social enterprise based in Barry which has received funding from WCVA’s Social Business Growth Fund (SBGF). Their aim is to safeguard the environment by making your shopping trip plastic free, with no unnecessary packaging, as well as making sure produce is ethically sourced and environmentally friendly.

Directors Amy Greenfield and Stuart Burnell were inspired to set up the social enterprise after finding it difficult to find sustainable produce in the Vale of Glamorgan and found travelling to Cardiff to get it defeated the purpose.

‘We came up against quite a lot of opposition initially, people saying it wouldn’t work, that people in Barry wouldn’t want to shop that way or have the money for it, more a Cardiff thing. But it’s an old-fashioned view of Barry,’ said Amy.

FROM ZERO TO ZERO-WASTE

Awesome Wales found that once they came up with the concept, things progressed fairly quickly for them. After finding suitable premises they couldn’t pass up on, they decided on their business plan and made their application to SBGF. The shop opened in July 2019, six months after their initial idea was conceived.

The social values that underpin their business model are also what have helped contribute to their success, according to Amy. Running as a social enterprise gave them a strong focus, and the nature of the initial funding from SBGF and the Development Bank for Wales meant they were less beholden to shareholders wanting a return on their capital, and could keep prices low.

This had an immediate impact, not just on Awesome Wales, but the surrounding high street in Barry as well. Being an affordable option proved hugely attractive to locals, and a nearby butchers’ shop even saw their trade increase by 40% after Awesome Wales opened.

THE BUSINESS OF LEARNING

They weren’t just making waves in Barry either – staff at Cardiff University Business School were so impressed with them that they asked to use Awesome Wales’ business plan as a teaching aid for their students.

As the world’s first Public Value Business School, they say they want to put a social conscience at the heart of its operations, and so turned to Awesome Wales. ‘We wanted something that reflects good business sense that also has social value’ said Dr Tim Edwards, Professor of Organisation and Innovation Analysis at the Business School.

‘We feel it’s important for students to recognise that business can speak to not just shareholder value, but to community value too. In simple terms, we are working to deliver social improvement alongside economic development to tackle some of the grand challenges in contemporary society.’

Students were asked to evaluate Awesome Wales’ business plan and explain what they thought of it. Beth Edwards, a student at the Business School said ‘I’d never considered the true merit of a public value company and how important it is for the local consumers and economy. I can understand why a small community would be in support of enhancing the quality of their local environment and why this flourished!’

ADJUSTING TO THE NEW NORMAL

Even with this sort of response, you might expect a business like Awesome Wales to struggle in the current climate, but they’ve found themselves thriving in the face of adversity.

‘During lockdown we’ve had to change our entire business model’ said Amy. ‘It had been in the plan to start doing home delivery and click and collect, but we weren’t meant to be implementing that until year two!’

The team managed to assemble a new website in 48 hours, and it instantly took off. Deliveries rocketed as lockdown saw a surge of online orders, going from four a week to over 60 a day overnight. Sometimes they could only open the website for deliveries for four hours before they’d hit capacity, such was the demand.

Even with this rush, they refused to compromise on their ethical stance when it came to sourcing goods – ‘we’d rather go out of stock than order from somewhere like Amazon’ Amy affirmed, but this was no hindrance to them.

RISING TO THE OCCASION

At one point in early lockdown, when the national uptake of home baking emptied shops of supplies, they were one of the only stores across the South West of the UK that had any yeast in stock, all the while making sure they procured as much as possible from other social businesses or co-operatives.

This sense of community is something Amy credits with making their lives easier – ‘There’s a network of 300 or so social businesses that share learning experiences with each other, so we don’t have to make every mistake ourselves.’

Therein lies the strength of this approach – by focusing as much as what they can do for their community as what they can sell to them, Awesome Wales are aiming to have the best of both worlds.

The Social Business Growth Fund seeks to put money to work in communities. Think you have a suitable project for it? Find out more here.