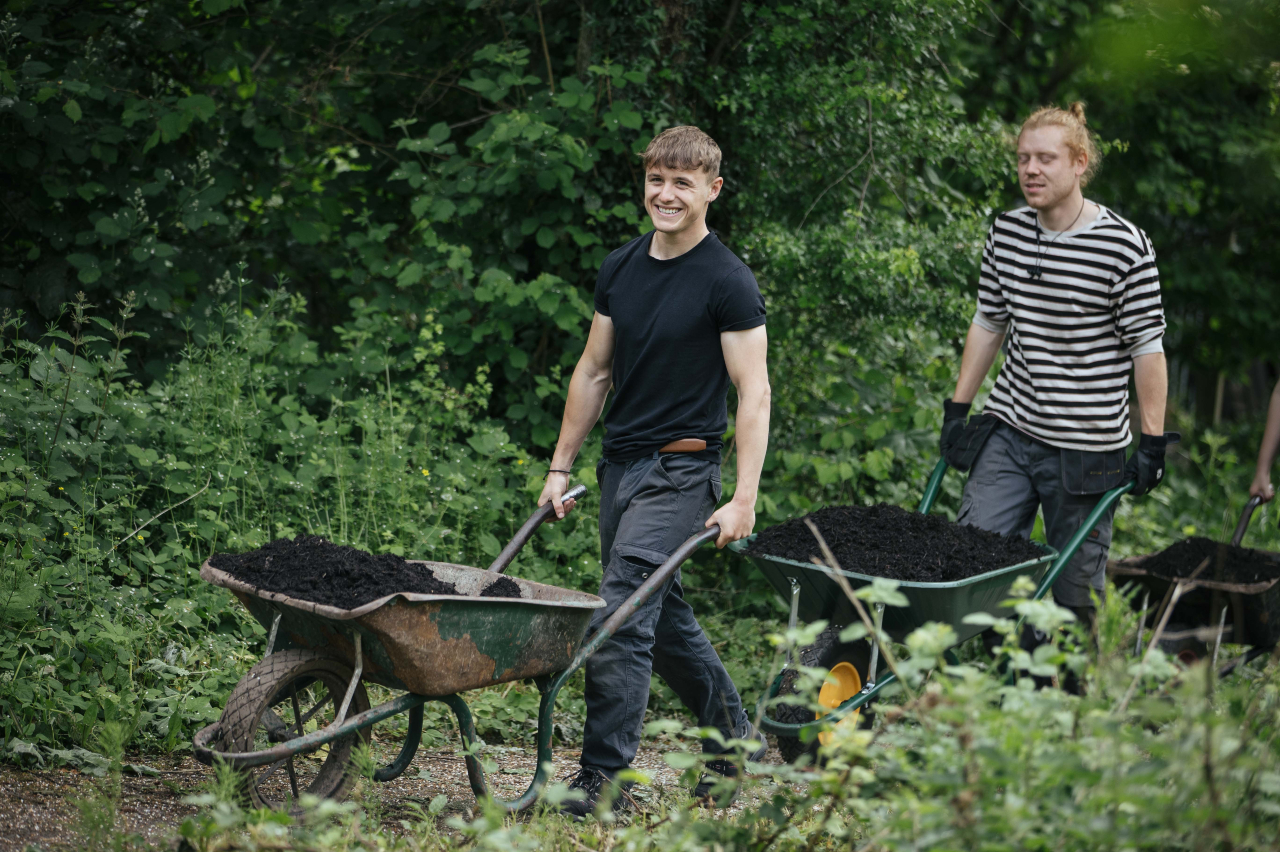 Voluntary organisations in Wales can benefit from six-month job placements completely paid for by the Kickstart Scheme. Here’s how Cynon Valley Organic Adventures got more than just an extra pair of hands.

Cynon Valley Organic Adventures took on five young people through the Kickstart Scheme to help them develop new skills and move into sustained employment. But they didn’t just get help growing the organisation’s activities and improving their business – they got to see young Kickstart participants flourish as well.

Cynon Valley Organic Adventures is a social enterprise community garden in Abercynon that welcomes families, schools and individuals to share their passion for learning about healthy eating and the environment. They bring in a variety of people from many different backgrounds to join in with various classes and activities to do with the natural environment around them. The Kickstart participants have been instrumental in helping deliver these.

PLANTING THE SEEDS OF SOMETHING SPECIAL

Since beginning their placements, Kickstart employees been involved in food planting, harvesting, maintaining crops, biodiversity and maintaining habitats, as well as working on restoring the river area and protecting that from flooding. They’ve also been instructed in tree care, and they’re building an outdoor cooking area with a pizza oven for visiting children.

‘A lot of the stuff they’ve done they’d never done before’ said Director Janis Werrett, ‘but they’ll try their hand at anything. It doesn’t take them long to pick up anything – we’ve had two visits from special needs schools, and they had to prepare lesson plans for them and they’ve been amazing.’

‘When they were working with kids with special needs they had to adapt their approach, every group was different,’ Janis explained. But adapt they did – for example, when explaining what various gardening implements were for, they related it to Minecraft so the children had context.

‘Some of these were the most difficult to engage groups and they did really well – they brought a perspective that older adults might not have been able to’ said Janis ‘they put a lot of effort in to relating to the kids’ perspective.’

Having them on board helped the organisation carry out its goals by engaging with the children and took a lot of pressure off Janis as she had extra hands on board. On top of this, those schools now also want to come back and pay them to run alternative education placements for their own pupils, which would represent a sizeable business investment.

FROM BUD TO BLOOM

One of the young people who came to Cynon Valley Organic Adventures through Kickstart, Meg, wasn’t planning on getting involved in learning when she came in. When she first started, she was very quiet, thinking it might be a good opportunity to heal from a family loss.

‘She’s a totally different person now, though, she loves any learning we throw at her,’ said Janis. ‘She was bullied as a child, but we’ve supported her and she’s developed her own voice, to the extent she now wants to do car mechanics in college.’

Another, Luke, lacked confidence when he arrived but was full of potential. Janis explained that she’s delivering a teaching course to a number of professionals, but Luke is by far the best in the class.

‘They’ve all been fab’ Janis explained ‘and we’ve really grown fond of them.’ Indeed, it seems to be more than just a job placement for them, as they want to continue attending as volunteers once the placement has ended.

Janis explained how they had taken it on themselves to go beyond the initial remit of the Kickstart placement as well – telling how a woman who lives nearby had contacted her after she had recently lost several members of her family.

Unable to leave her house because of her anxiety, her garden had become overgrown and unusable. Three of the Kickstart participants, Nathan, Jack and Luke went to her house and borrowed tools they had learned to use at Cynon Valley Organic Adventures.

They cleared her garden entirely off their own initiative, meaning her young son could finally play there with his friends. She messaged Janis in tears, saying ‘It may not seem like much but it’s changed our lives’. The woman’s teenage daughter also got in touch, saying ‘I haven’t seen my mother smile in months, but that kindness totally put her in a different frame of mind.’

The Kickstart scheme may be a job placement, but Cynon Valley Organic Adventures show it can be a real all round development opportunity for everyone involved.

Voluntary organisations in Wales are increasing their capacity while supporting a young person’s development. Could you benefit from fully paid job placements with very little admin and a generous personal development budget?

Employers can use the Kickstart scheme to create new six-month job placements for young people (aged 16-24) who are currently on Universal Credit and at risk of long-term unemployment.

Draft guidance for charities about their use of social media

The value of the voluntary sector to health & social care