Being the Change – photography exhibition
21 Mar 2019
These 11 images capture the passion and commitment of these extraordinary people to their chosen organisation.

Our Being the Change photo exhibition launched at gofod3 2019 on 21 March, and showcases just 11 of our 900 members.

Together, these images represent all staff and volunteers who work the length and breadth of Wales, in what is estimated to be over 32,000 third sector organisations.

Each and every one of them are being the change they want to see in society.

But we can all be that change. There is a charity or social enterprise that needs you. Get involved and help these organisations thrive, so we can improve the wellbeing of all people in Wales.

All images were taken by photographer Warren Orchard who predominantly works within the media and advertising sectors, for the likes of Netflix, Channel 4, Universal and Warner Brothers, recently winning a Bafta Cymru for his title sequence for the TV series Hinterland / Y Gwyll.

The exhibition launches at gofod3 on 21 March and will be shown at the National Eisteddfod in Llanrwst between 3 and 10 August 2019. 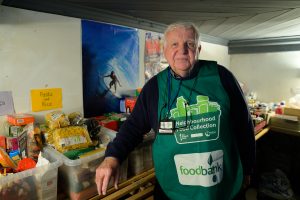 Roy volunteers to help run Anglesey Foodbank. They want to alleviate the hunger and poverty they see in their community.

Those who need support and can make the journey – either because they have the bus fare or are physically able – come to Elim Church in Holyhead. They pick four items from the fresh produce, donated by the local supermarket, and then wait for their order of dried and tinned food, while a friendly face offers them a cuppa and a little to eat.

Roy is responsible for rural deliveries, and uses an electric van, funded by the Postcode Lottery and Horizon, to get around the island. These deliveries doubled last January. He puts this spike for emergency food packages down to sanctions and five-week delays for Universal Credit payments.

He regularly goes the extra mile, and works well past the foodbank’s opening hours. A distraught mother recently called, whose 20-something daughter, discharged from hospital after a serious operation, had not eaten for two days. Roy jumped in his van to make a special delivery. 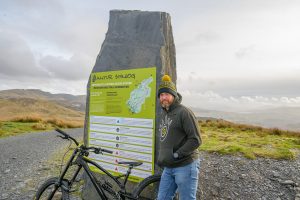 The social enterprise, Antur Stiniog, in Blaenau Ffestiniog, is Adrian’s workplace and he loves it.

He’s been working at the bike park for the past seven years, though he’s been racing bikes for the past 20. Now a mountain bike development officer, this former Welsh and British mountain bike champion spends his days buying bikes, developing trails and securing new grants.

Not only has the bike park nurtured local talent but offers training and career opportunities to the local community. It has also kick-started community regeneration, with tourists now spending £16.25 per head. In 2007, when Antur Stiniog was first established, spend per head was just 25p in Blaenau Ffestiniog.

Antur Stiniog, which led the way for Zip World Bounce Below, demonstrates how a social enterprise can kick-start a community’s local economy. With passion and determination. 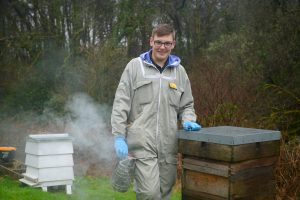 Beekeeping has been in Dafydd’s family for over 50 years. His grandfather, Mike, was a well-known beekeeper, who founded Pant Derwen Apiary. Dafydd started beekeeping at just 11-years-old, with one hive. Sadly, two years ago, Mike died, with Dafydd inheriting 40 hives.

Today, the 16-year-old remains the youngest member of the Bridgend and District Beekeepers Association. Their experienced support network has been invaluable, particularly the beginner course that Dafydd attended twice (he confesses that, quite understandably, he wasn’t listening the first time).

Dafydd travels to Slovakia in 2019. He will be one of three Welsh representatives at the International Meeting of Young Beekeepers. He admits to being “a bit of a tree-hugger” and environmentalist, because “a third of our food would disappear without bees”.

Under his management, the company has grown to 70 hives, and is turning a small profit. 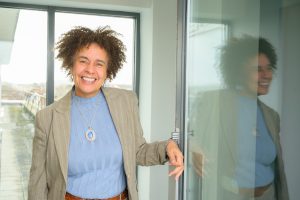 Award-winning Suzanne has been a campaigner within the BME sector for over 30 years. She has spent almost 20 years dedicated to improving mental health services for BME individuals and communities.

In 2010, Awetu (of which she was the Director) and Cardiff and Vale Coalition of Disabled people merged together to form Diverse Cymru which was launched in 2011, in recognition of the difficulties and discrimination faced by people experiencing inequality in Wales.

Suzanne is a trailblazer, having designed and published Wales’ first ever Cultural Competency Toolkit for BME mental health in 2016. It helps health professionals and services deliver more appropriate culturally sensitive care and support to their diverse client group.

In 2018, Suzanne and Dr Charles Willie designed and developed the BME Mental Health Workplace Good Practice Scheme for mental health practitioners. It is the first of its kind in the UK and has been endorsed by The Royal College of Psychiatrists. To date, seven health boards, one health trust and five voluntary sector organisations have signed up. 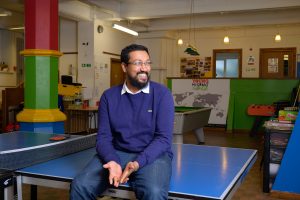 EYST is an award-winning charity that supports BME young people, families and individuals in Wales. Since 2005, it has grown to a staff of 40 and 100 volunteers.

Helal has been with EYST every step of the way. First, as a youth worker, and now the leader of the Syrian Resettlement Project, for Carmarthen, Powys, and Swansea. He and his team have welcomed 60 families. For many, Helal is the first person they meet at the airport.

Helal describes his work as incredibly rewarding. His goal is to help families, who’ve endured years of enforced regimented camp conditions, to start thinking for themselves again. To live independently, in their new home.

His proudest moment, to date, is seeing a 20-something father, in the space of three years, learning English, finding part-time work, and earning his driver’s licence. 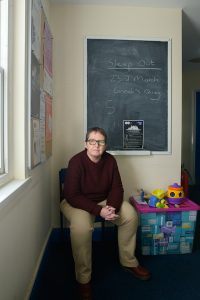 Salli has been the Chief Executive of Citizens Advice Flintshire since 2001. Her team of 36 staff help support approximately 7,000 clients per year. This does not include family members.

When Citizens Advice was first set up, a popular query was how to apply for a fishing licence. Those days are gone. Today’s clients have a range of complex issues that are not so easily resolved.

The current climate has Salli at her gloomiest: she worries about continued austerity, welfare reform and the uncertainty of Brexit paralysing funding institutions and organisations. She has not felt like this since the late ’80s and is fearful for the future, because she may soon be forced to close frontline services, which she has always managed to prioritise.

This will impact on what she considers to be the best part of her job: developing people who are passionate about advice. And she walks the talk: every single member of her senior management team started out as a volunteer. 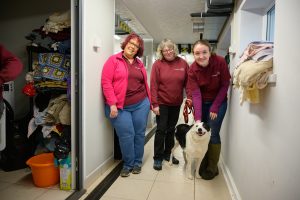 Hope Rescue has been saving the lives of stray, abandoned and unwanted dogs since 2005. Based in Llanharan, they help 800 dogs a year, which is approximately a quarter of all strays in Wales.

They help dogs in Rhondda Cynon Taff, Bridgend and the western part of the Vale of Glamorgan. They are also committed to taking in all stray dogs from Blaenau Gwent, Merthyr Tydfil, and Torfaen.

Hope Rescue is indebted to volunteers like Lois, Alison and Angela, who help give hope to dogs like three-year-old Connie. She’s been in Hope Rescue’s care since December 2016 and is currently looking for a new home. 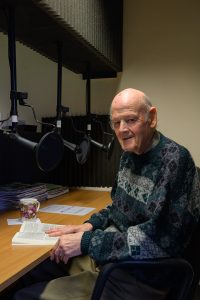 Len Richards, who lives in Nantgaredig, has been volunteering at Talking Books Wales for the past 28 years, reading novels in a small studio in Carmarthen for the enjoyment of others. He is one of 35 volunteers who support two part-time staff members to publish each year some 50 audio recordings of popular books, mainly in the Welsh language.

Established in 1979, Talking Books Wales has published nearly 2,500 audio recordings in total, and serves the whole of Wales. Today it provides a free service to approximately 450 blind people, partially sighted people or those who have difficulty reading print.

They currently distribute their recordings as CDs, as it best suits the needs of their clients, who are of an older age-group. But with fast moving technical changes afoot, and the number of people with sight problems set to double by 2025, this charity is ready to evolve to ensure future generations are able to enjoy books in their mother tongue. 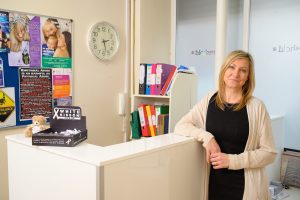 Vicky is the Chief Executive of Threshold DAS, an organisation working with women, men, children and young people who experience domestic abuse and sexual violence, and men who exhibit abusive behaviour.

Vicky was born and raised on the outskirts of Llanelli, and first came to Threshold DAS (formerly known as Llanelli Women’s Aid) as a volunteer in 2000.

Under her leadership, Threshold DAS has a staff team of 45 and – importantly – 30 volunteers. She also facilitated the need for a male perpetrator programme in Wales, with Threshold becoming one of the first women’s organisations in Wales to secure funding to run an Early Family Intervention Programme that included a perpetrator programme.

This change of direction, to also work with male perpetrators, has been controversial. But she took this decision after extensive research and consultation with staff members and service users, all of whom wanted to find a solution to the growing problem of male violence: and offering families a whole-family approach to stay together safely or to spilt amicably. 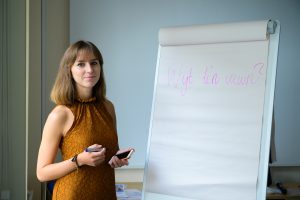 24-year-old Tirion works part-time for Time to Change Wales in Cardiff, while studying for a Masters in Art, Health and Wellbeing. She also works in a coffee shop on weekends.

Time to Change Wales is a growing social movement working to change the way we all think and act about mental health problems, by encouraging people to talk about their mental health so as to reduce stigma and discrimination.

As Digital Engagement Officer, Tirion looks after all their social media accounts. It means she is almost permanently glued to her phone.

She loves her job and is passionate about helping people share their stories. With her own lived experience of mental health, and the loss of a friend to suicide, she understands the power of stories to comfort and reassure.

One in four people will fight a mental health problem in any given year, and the stories gathered by Tirion can help people understand that it can affect anyone. 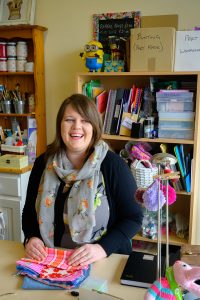 Tŷ Hafan celebrated its 20th anniversary in January 2019. It is one of the UK’s leading paediatric palliative care charities, offering care to children and support for their families throughout Wales.

Laura is part of the Supporter Care Team, at the charity’s headquarters in Sully. She looks after regular givers and hosts monthly visits for fundraisers who go to great lengths to raise funds.

Laura has been involved with Tŷ Hafan for the past 15 years. When she turned 18-years-old, she chose to volunteer for Tŷ Hafan. Since then she’s been a charity ambassador and a collection box agent, before getting her current job.

She views the charity as family. She’s pictured in Tŷ Hafan’s upcycling project, in the handcrafted workshop, where volunteers and staff come twice to three times a week to turn an unwanted item into a saleable item, with all profits going to the charity.